It started with my wife. She’s from The South, loves every kind of baozi, and takes me to eat them whenever she has the chance. Sometimes, if there’s time, we go out to eat them for breakfast. One morning we were sitting in a basic little restaurant around the corner from our place, eating some disappointingly soggy breakfast baozi (allegedly “Hangzhou Xiaolongbao”) with vinegar. These ones, in fact.

They were bad, overcooked, though on the plus side the meat inside seemed to be of an acceptable grade, better than the ones in 7-11. Thinking about this, I casually said that I’d like to take an afternoon to try a few of the different baozi available in Beijing, maybe take a few photos and write a review. V nodded at me, with a decisive smile and a twinkle in her eye. Over the next two weeks we then spent the best part of two and a half days travelling around, taking many buses, losing my hat, and eating more baozi than I could’ve possibly imagined.

Before I start, you might be wondering what “baozi” are, so let’s have a quick rundown.

Baozi are generally translated as “steamed buns” in English, the implication being that they are balls of bread, cooked in the vegetable steamer, which is a good definition of mantou, not baozi. As we’ll see what actually can be called “baozi” is a wide category of items, with a few surprising inclusions and exclusions. There only seem to be three basic rules

1. There’s a wheat-based skin (thick – i.e. pasta or thin – i.e. bread)
2. There’s something inside, typically meat
3. They are pinched at the top like a bag (‘baozi literally means ‘little bag’) rather than at the side (like jiaozi – i.e. dumplings are)

If you’re still not sure, you might want to refer to “Are these dumplings I’m eating?” – it won’t make things any clearer, but you might at least get a little more perspective on your confusion.

Each baozi will get a review from each of us, and an average score out of ten. Pictures can be clicked for large-size versions.

#1 – Laomanbaodu: this is definitely not baozi, but I’m hungry

We set out on the first day of our trip at 10.40am on a Thursday, and spent nearly two hours sitting in traffic before arriving at our first location just in time for lunch. It was on a main street in the old Muslim quarter, an area of the city I hadn’t even heard about before. The restaurant was old, smokey and packed with customers for the lunchtime rush. We found a couple of seats next to a man finishing his soup, made our order, and received our food within 30 seconds.

Location:Nanhengxijie NO.98-1 (near Niujie), Xuanwu District
Price: The Shaobing were ¥5 each, and the accompanying soup was just ¥2. 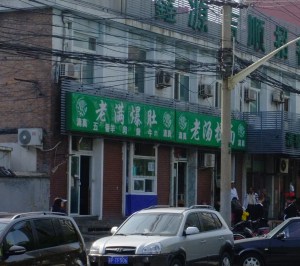 James – two ingredients here, and both of them are done just right. The bun is as crispy as it should be, not stodgy like the ones you usually get in Beijing. The lamb inside is juicy and tastes refreshingly free of additives. Really not bad at all. 8/10

V – This is simple food you can eat anytime and it will never leave a bad taste in your mouth or make you feel ill. 9/10

#2 – Dintaifeng: They’d better be good for this price.

The next restaurant was a short bus journey away, in the relative opulence of Beijing’s upmarket shopping hub Xidan. It shouldn’t be surprising at this point that the most pricy restaurant we went to all day was in the basement under a shopping centre. Dintaifeng is apparently world-famous, so expectations were high. Again the place was packed, but this time with an altogether different class of people.
We had some traditional Shanghai xiaolongbao with pork and crab, and an alternative version with chopped chicken inside. 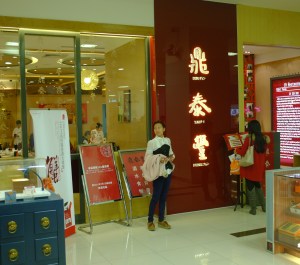 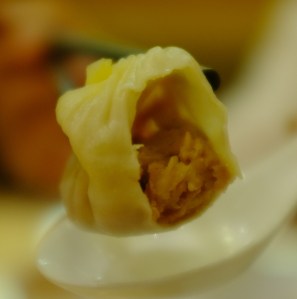 James – The pork and crab set were excellent. Delicate skin which didn’t break too easily, and inside the meat has a well-honed delicate sweet-salty flavour. Most importantly there’s plenty of soup and plenty of crab roe. 8/10.
The chicken ones, on the other hand, don’t work at all. The skin is just the same, but inside there’s nothing but dry, boring chicken meat, which seems to be just wrong for xiaolongbao. 5/10.

V – Pork and crab is good, though the skin could be a little better. 7/10. The chicken ones are not so good, 5/10. If you treat people it might be nice to come here, but it’s not a place locals would be seen in.

After two hours endurance shopping in Xidan we took a bus up the road to Gangwashi (which is pronounced “gang wah shuh” not “gang-washy” in case you were wondering) to a branch of my favourite baozi and dumpling shop, AchunJia. Unfortunately it seems the branches differ a little, and it wasn’t up to the standard of the one in DaWangLu, so we’ll need to return there later. These are Jiangnan baozi, apparently the area which sets the gold standard as far as these things are concerned. These people take their food very seriously indeed, and you can’t help but feel they’d still be making them if there were no customers to eat them. 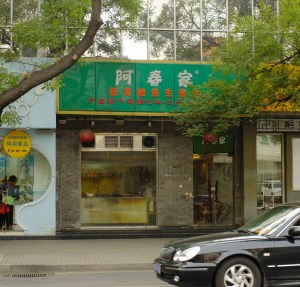 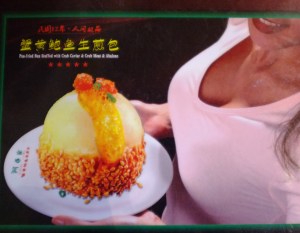 James – Unusual, grainy skin (wholemeal maybe?) but inside is savory and delicious. You can tell the quality from the fresh crab taste. No way of faking that. The skin is a nice change, but to be honest it’s a change for the worse, a little too doughy – a shame as I do love this place. 8/10

V – The skin is thicker than usual. Inside the soup has more crab, and is more oily. Oily is good, by the way. 7/10