As desperate marketing emails remind me every day, we are living in difficult / unprecedented times, and if anything I suppose it is a surprise that there haven’t been more misunderstandings and spreading of conspiracy theories. But there are still things worth explaining, whether that has much of a difference to the outcome or not.

Coronavirus, we have heard, jumped species from possibly bats(?) at a place called a “wet market” in Wuhan, China, where wild animals are sold and slaughtered. These places have been shut down by the Chinese government, but they will open again, and something should be done. Here are a couple of people I like a great deal talking about this issue.

Here is George Monbiot in The Guardian

I have a lot of sympathy for these points of view, and for animal rights in general, but I have also spent a decade in China, and do not recognise the picture which is usually painted of these places.

The first “wet market” I went to was in the coastal city of Zhuhai, where I was living in 2006. It was near where the fishing boats came in from the Pearl River Estuary, and naturally, there was a good deal of seafood on sale. The floor was wet from the overflow from the fish tanks, and the lack of windows on the roof made the place look dingy, which combined with the smell of fresh fish and meat to make it a visceral sort of experience. An Australian couple went there with me once and described it as “absolutely disgusting” and “furral”. If you stayed downstairs, away from the meat, and held your nose perhaps, you would find an amazing assortment of fresh fruit. Lychee, longan, dragon fruit, guava, sugar cane, pomelo, durian; every week I would come back to try another, all would be fresh and delicious, nothing like the flavourless mulch I’d been used to in British supermarkets.

Because here’s the point – “wet markets” are just fresh food markets. Many do not even sell meat, and those which do generally reserve a corner for it, which is easily avoided. If you had the choice of going to a farmer’s market or going to a supermarket in which everything is even more homogenised and processed than it is in the west, which one would you choose? The wet market in Zhuhai was not a good example – through the next decade I must have been to 30 or 40 of these markets, none was spotlessly clean, but most were well-ventilated places, full of life and fresh produce. Here, to give an example, is the market around the corner from my apartment in Tongzhou, a suburb of Beijing. 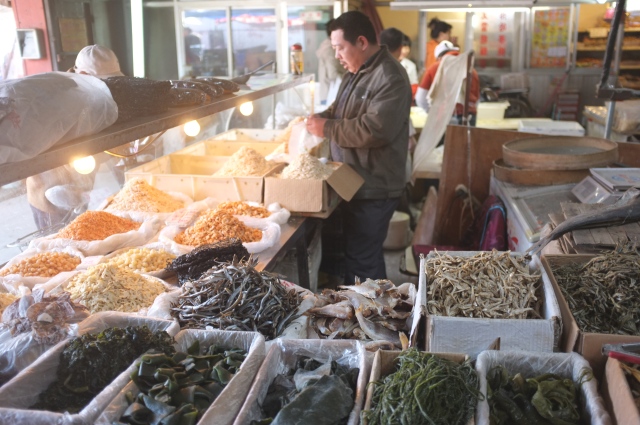 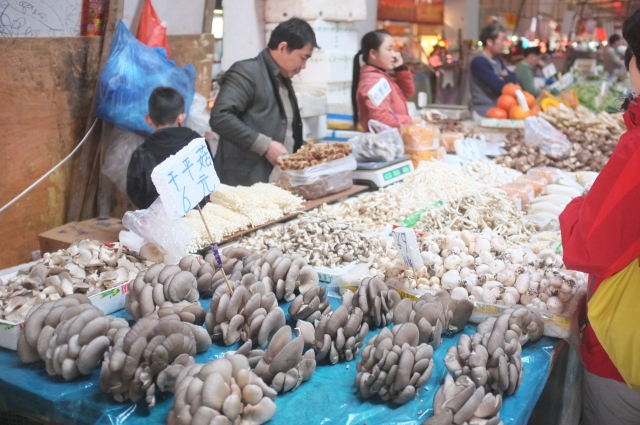 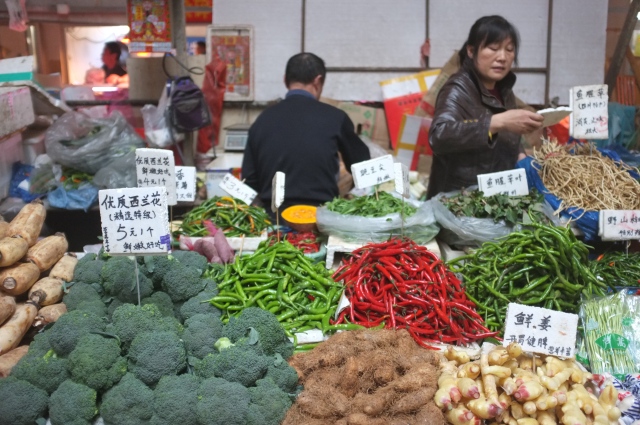 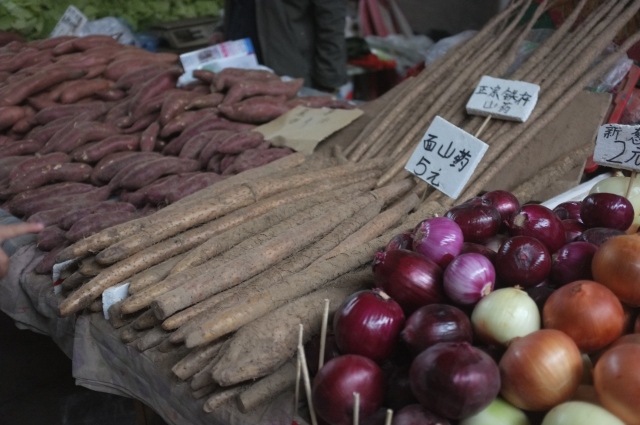 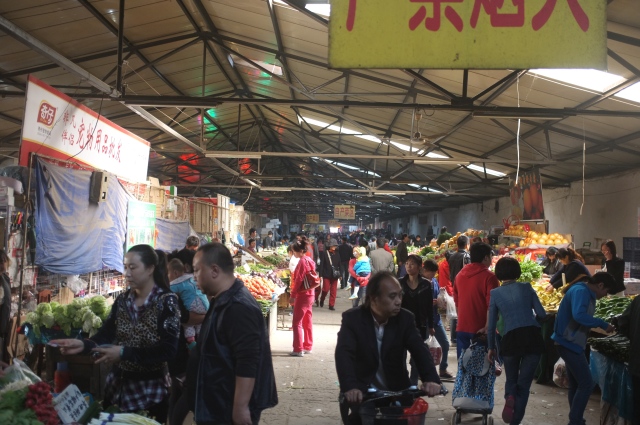 You will note here the lack of any meat or fish, which was around the other side. I went there rarely, but we did buy both. Fish would be bought alive – how else could you make sure it was fresh? Meat, naturally, was already cut up in a butcher’s stall. A few markets I went to had live poultry in a stand-alone shop in the corner of the market, and these followed the same logic – in order to ensure you were getting fresh meat, you chose a bird and waited while it was slaughtered and plucked. If you don’t like the sound of that, well I didn’t either, and I steered clear of those corners, though I should also point out that if you have concerns about the welfare of these birds, they would be treated the same, or even much worse in the west.

So, some of these markets have no meat for sale, a minority have live poultry, only one I ever saw had any exotic meat – crocodile meat, ready-prepared, for sale at a market in Guangzhou – and I never saw live animals for sale apart from birds and fish. Yet all of these would be counted as the “wet markets” which have been closed down, and which are now, gradually, opening. I don’t think the wholesale closing of farmers markets, when the only other option is large chain supermarkets, is any way to improve the natural or human environment.

So, ok, we don’t close down the wet markets, just ban the selling of live animals, or of a list of exotic animals. Why would these Chinese people want to eat bat or pangolin anyway? The answer to this is that they don’t. The vast majority of Chinese people have never eaten exotic meats like this, much as you’ve probably never tried Rocky Mountain oysters, or casu marzu. The only reasons anyone has to eat these are (a) as a status symbol for rich assholes (we also have some rich assholes who fuck things up for everyone else in the west) and (b) because 40 years ago large parts of the country were undergoing starvation, and in desperate times anything can be food. For young Chinese people, who have been raised with such luxuries as pets, the motivation to eat exotic meats is non-existent, and as with millennials in the west, most are of too low a financial and social standing to even do such a thing anyway. Ask your average Chinese person under 40 years old what they think of eating these animals, and they will find it as bizarre and inexplicable as you do. The young woman eating a bat, incidentally, was filmed in Palau, which is 3320km away from Wuhan.

I’ve been having arguments with people on the internet about this for a month now. When I have been through all of the above, the argument finally gets down to this: there is massive animal cruelty taking place in China, and the Chinese people are the ones responsible for doing something about it. They should pressure their government to make a law banning the sale of exotic animals. Having been brought up in the UK, I can understand this point of view. As a nation we place a trust in the letter of the law which other people tend to reserve for gods or magic. If a new law is needed, well, we can get all sign a petition and send it to parliament. There is a trust in institutions, and a trust that the people in charge are fundamentally decent and are trying their best (attitudes I find infuriating, but which do indicate a high degree of trust in the system.)

In China, if you get together a petition and present it to the government, what happens? Quite likely nobody will see you again, and your cause will not be advanced an inch. But it isn’t just that. Imagine you have grown up within this system, during a prosperous era in which your family have risen from starvation to comfortable middle-class life. The idea to try to change things yourself doesn’t even enter your head. Why would it? The making of laws is the business of the government. The enforcement of laws is the business of the police. Your business is to get on with your own life and that of your family as best you can. If animals are treated badly, yes, that’s awful, but that reflex to write a strongly-worded letter to your MP has no reason to follow on from that, why would it?

This is what I want everyone to know about China, beyond anything about wet markets. People there are the same as other people around the world, they are all individuals, with their own ideas, their own dreams for their futures, but they are not in a democracy. There is no point in preaching to Chinese people about animal rights – the vast majority are as appalled by cruel treatment of animals as you are, but unlike you, they have no power to do anything about it.

This entry was posted in diary, things in china and tagged animals, China, markets. Bookmark the permalink.