UPDATE: This is a new version (8th September 2014) – six country names have been changed and one capital has been moved. I think it’s probably still not finished, though – so please feel free to share any ideas about how it should be changed.

Last year there was a brief craze for maps of parts of the world divided into parts with roughly equal population. The best was a map of the 50 US states, which was partially intended as a proposal for electoral college reform. European versions so far keep the basic concept, but lack character. What I wanted to find was a version that at least tried to draw lines related to language, history and culture – one that at least had properly thought-through names and was worth more than an odd glance.

I couldn’t find one, so I decided to make one.

First I went to the Wikipedia page for Europe, took the population of Europe – 739,165,030 – the number of countries – 50 – and divided to get 14,783,300. Then I set to working on dividing up the land into chunks of approximately that amount. I thought it would take a few hours, but now it’s six months later and I’m still not sure if it’s done. I wasn’t working on it the vast majority of that time, of course, but have kept returning to it.

A few points before we get to it:

1. I can imagine that this will make some people very annoyed, so just to reassure everyone – this is in no way an actual proposal, and if it was carried out it may well lead to some of the bloodiest wars in history.
2. The original is based on an algorithm. Unfortunately this kind of uniform regional population data is unavailable for Europe, and I wouldn’t know how to start even if I had it. Population is therefore taken from Wikipedia, and should be treated with a pinch of salt.
3. It’s not really finished, and there are some bits I’m not happy with at all, but have no idea how to fix right now. So please leave me some feedback if you have any ideas on how to change it.
4. I really have no time to explain all the names, but it’s not hard to find out where any of them come from. 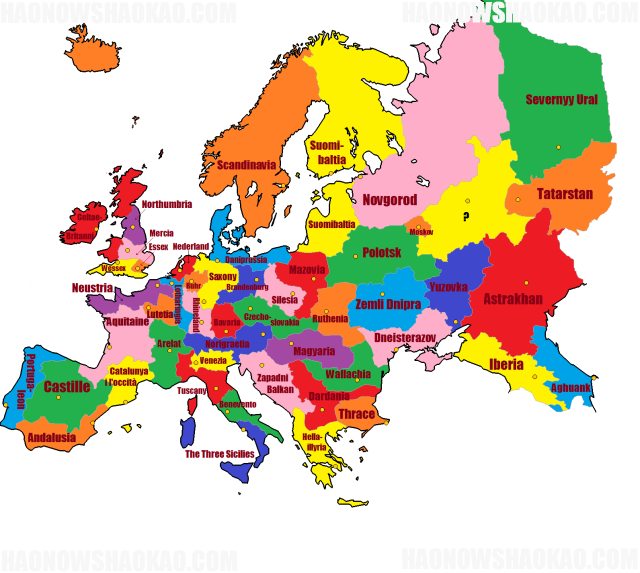 …and the details. This is just here to answer any easier questions about what’s made of what. Once again, click for legible.

Any comments / input are very welcome. Updates may be slow though.

This entry was posted in diary. Bookmark the permalink.