The Commute and The Queue 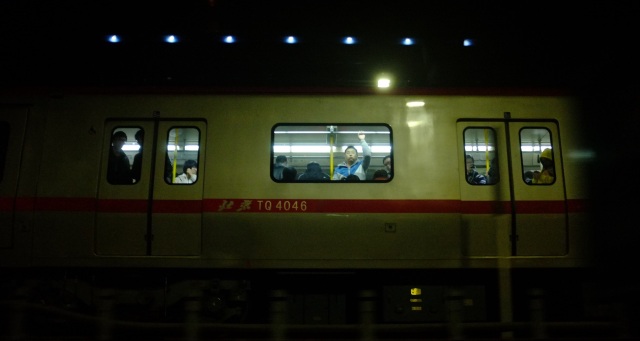 Being a typical 21st century family man in Beijing, I spend around 10-15 hours of each week commuting to the centre of town. This, all-in-all, is ok. It’s not like a couple of years ago when I used to use the subway during the rush hour. I filmed a typical day’s travel back then, and despite a few other lines opening it’s still pretty much the same now. Nobody seemed terribly impressed by this video when I first put it up, but it still looks like something I never want to do again, especially on a daily basis.

(Some notes for this video – the first minute shows people attempting to get on at each stop – after two stations the train is full and all the commuters are left on the platform. So if you live between Shuangqiao and Gaobeidian good luck getting to work in the morning! Then there’s the twenty-minute slow walk between platforms at the interchange and the scramble to get on the next train. Finally we have the great mass of people fighting to get on / off at Jianguomen, where it typically took the arrival of five trains to get your way to the front if you arrived at 6pm.)

These days I’m fortunate in that I don’t need to travel at rush hour, and that there’s a bus that goes the whole way – a fairly nice one where I can sit down, listen to music and podcasts, and generally have a more relaxing time than I have either at home or work.

When I started taking the bus, the problem was the queue. Chinese people, as has been noted a great deal elsewhere, don’t queue, and the scrum at the door of the #669 every evening did nothing to dispel this idea. As an English person I have an ingrained conviction that queueing is the cornerstone of civilization, and taking part in a fight every day in order to get home, well, my faith in China was starting to be shaken. That was until I discovered the secret – some bus stops have a clearly demarcated fence and somebody to police it. Take a look at this little beauty – 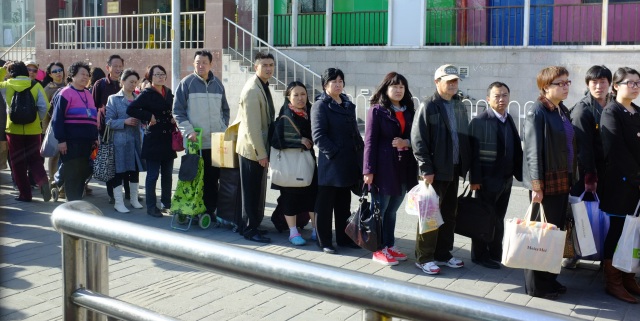 A straight line, no branching out in different directions, nobody making a second queue next to the first one – we could almost be in England. Then there’s this one – a hundred yards long and still in perfect order.

The best variation, one which I haven’t taken a photo of as I’m generally standing in it, is the queue for the #807. Two queues, in fact; one for people who want a seat, and one for those who don’t mind standing. When the bus arrives the first queue files on, then when the seats start to run out the first queue stops and the second starts. It’s more organised than anything I’ve seen even in the most well-mannered parts of the UK, and (as stupid as this may sound) it’s gone some way to restoring my optimism about China.

Except when a lazy bus driver opens both doors and the scrum re-appears. But let’s not mention that.

This entry was posted in diary and tagged china life. Bookmark the permalink.

2 Responses to The Commute and The Queue