It was one of those odd names you hear on the subway. “Military Museum.” “Beijing Workers’ Gymnasium.” “Agricultural Exhibition Centre.” Hangovers from the seventies and eighties, just hearing these places mentioned reminds you that, for all the skyscrapers and flaunting of wealth, you’re still living in a communist state, of a sort. If this were my holidays I might get off the train and find out where I was, but now this is just my home, and I have to get to work, or get home, so the thought is fleetingly forgotten.

Then, one cold winter morning, my wife suggests we actually go there. Why? To buy agricultural products. Food, in other words. Festivals are approaching, and mountains of snacks are required for entertaining purposes. So off we go, taking along both her parents and the baby.

We take a bus followed by a couple of tube trains. Line ten has an announcer with a drawling Midwestern accent – “Agricultural Exhibition Cennurr.” We’ve arrived! Beijing’s subway system was not designed with prams in mind, and it is with no small amount of effort that we carry everything up the steps and emerge into the unseasonably clear, freezing Beijing morning. We pass through the immense iron gates and, in typical Chinese style, find our way down an unsignposted side path to the exhibition cennurr proper. 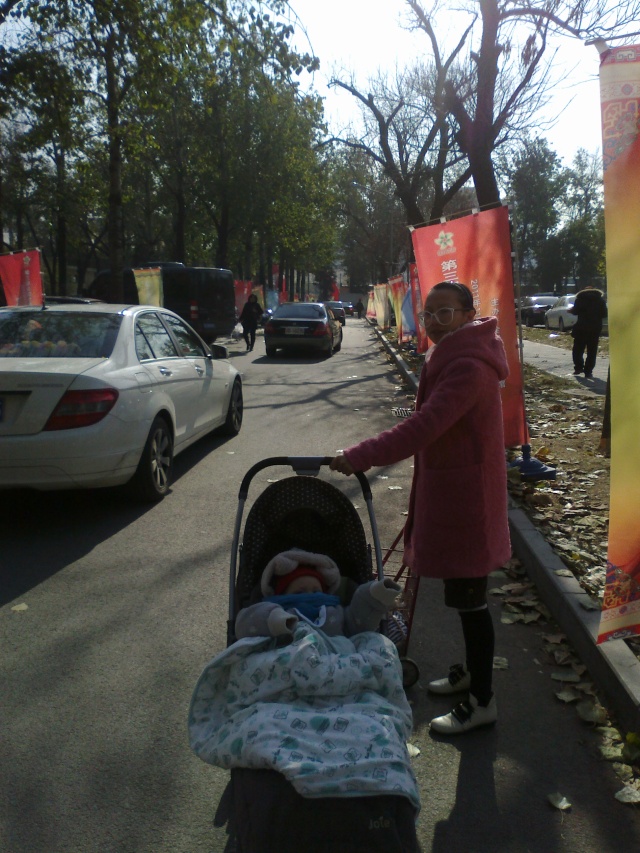 We pay ten quai each for tickets and get inside the structure. It looks very much like a temporary building, somehow left standing for much longer than was planned. V’s mother, not usually the most cheerful of people, becomes immediately excited at the sight of all the stalls. We all meander off, trying and buying.
Each section belongs to one of China’s 22* provinces. This proves to be a good running joke as we all tend to wander away from each-other, having to phone everyone to meet up every fifteen minutes. “Where are you?” “Shandong.” 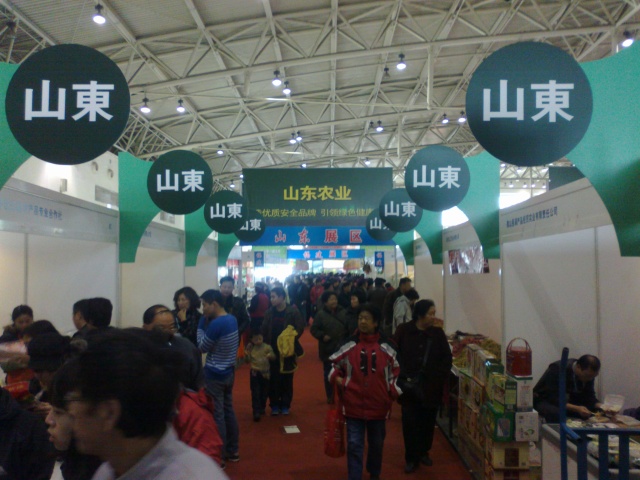 This stall mainly sells dried fish. When I was in Zhuhai I once asked a ‘business English’ class to make a plan for an import/export business. They came back with the idea of sending shiploads of dried fish to the USA. I’m not entirely convinced. 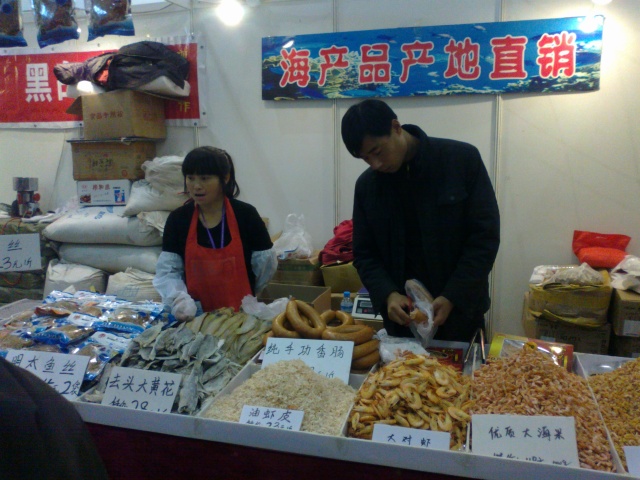 Apparently goji berries are a big deal in the west now, a “superfood”, whatever that’s supposed to mean. I’d never seen them before I first came to China in 2006. There are plenty here, if anyone wants some then now is a very good time to ask. 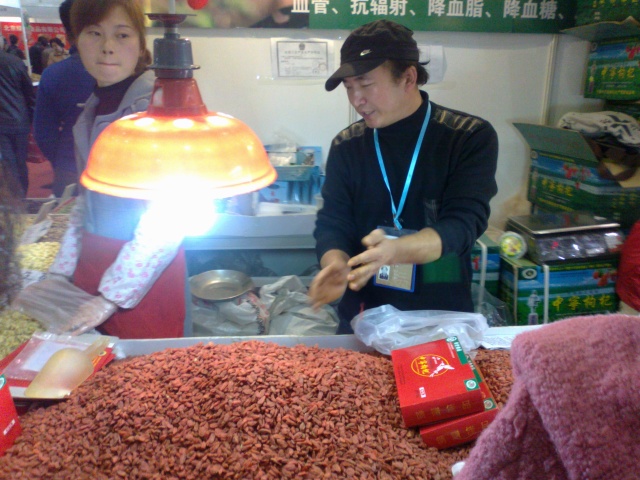 In 2010 I went with V to another market, similar to this one but in a ridiculously inconvenient place and largely deserted. There I tried basil seeds for the first time. Instead of growing the seeds into plants, the idea is to add them to boiling water, wait until they turn into frogspawn, then drink the resultant concoction. The taste isn’t entirely unpleasant. V had never seen this before 2010, so I suspect it may be a new invention – or perhaps just a Northern thing. 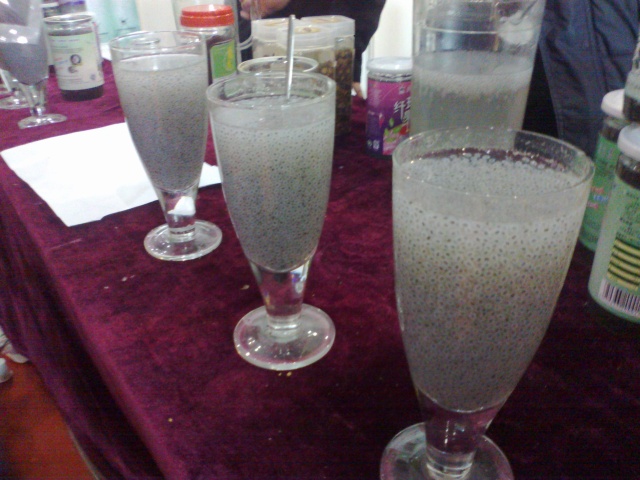 If you had told the ten-year-old me that I’d be perfectly happy eating salty egg custard filled with miniature shrimp, shells-and-all, I would never have believed it. But here we are. How many dried shrimp are in this box? Lots. And then some. 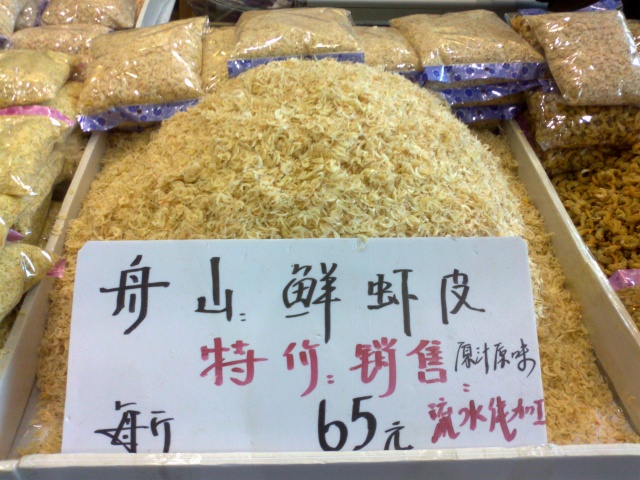 Unsurprisingly there are plenty of teas on sale. I like teas, I have too many teas, I can’t buy more teas. 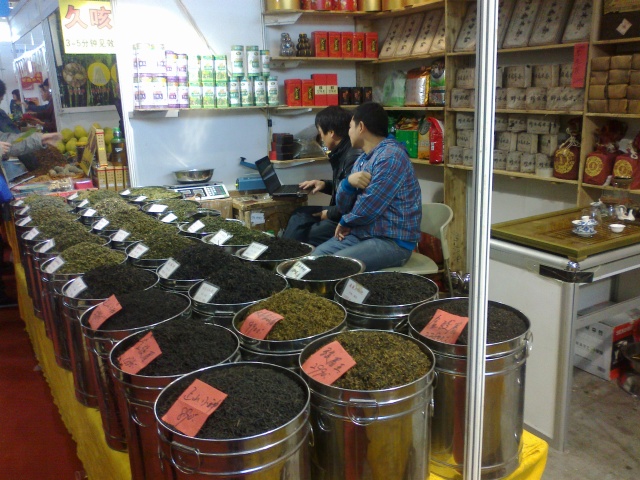 Here we have dried lotus seeds and a few other ingredients needed to make ‘sweet soup’. There may be a better name in English for this breakfast dish, but we don’t know it. You also need dried white fungus (again this must have a better name), goji berries and plenty of sugar. Also in the picture: V’s mother’s hand. 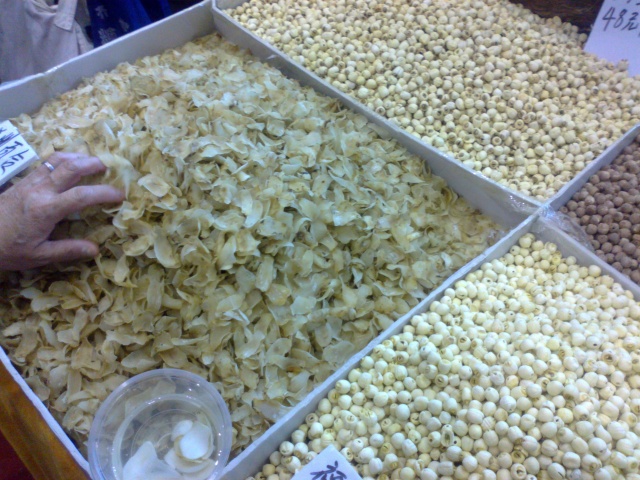 Honey is very cheap in China, suspiciously cheap in fact. I have a hunch that it’s unlikely to be 100% real, a feeling borne out by eating plenty of the stuff. These three barrels, however, contain a substance which almost certainly is the real deal. Each tastes distinctly of a different flower. All three are delicious, and I blow most of my food budget buying a large jar. I like honey. 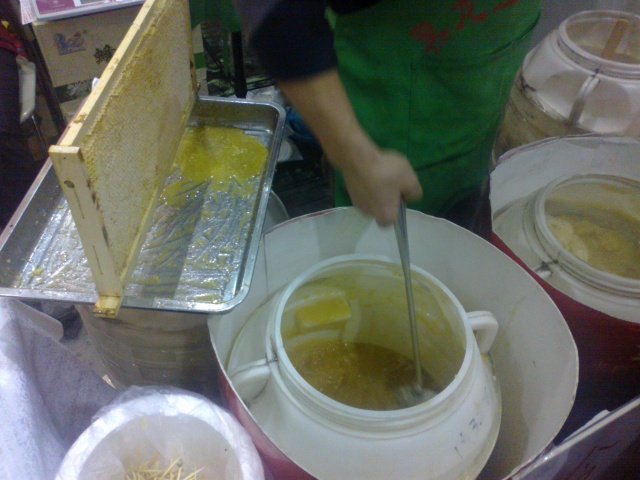 Another thing I’d never seen before I came to China is people actually making oil. This isn’t unique to specialist food markets – there are two separate stalls making bottles of oil in our local market. For some reason people are suspicious of commercial oil around these parts. Hand-made oil is just not reasonably priced, though, so we’ll just have to keep taking the risk. 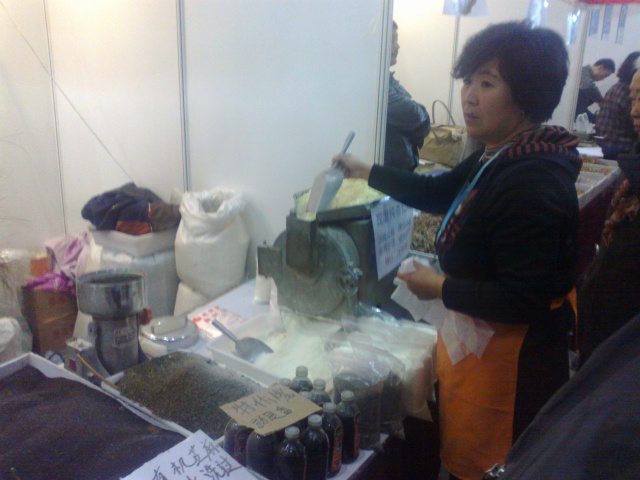 One of Beijing’s most popular street foods is roasted chestnuts, and they are still (just about) in season at the time of our visit. We stop to try one, and it’s good enough for us to forget the ridiculous price and buy a bag – a bag with a picture of an old man with a long beard and a hat. Then we turn around and there he is. V is still quite surprised when I take this picture.** 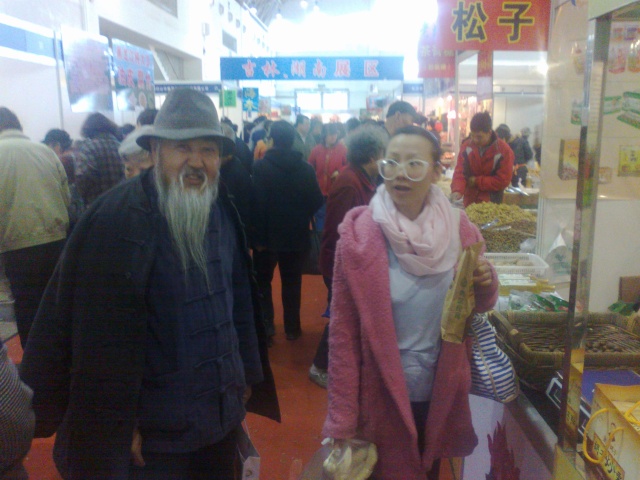 On our way toward the exit we come across a stall selling a strangely shaped yellow fruit. “Does it taste good?” “No, but you can make a healthy tea with it.” I’ve heard that one before. Anyone have any idea what the hell this is? 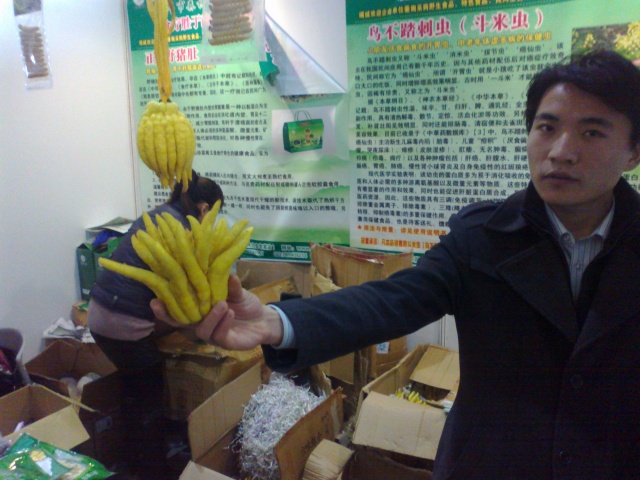 It’s getting late when we leave, and most of the stalls have closed up for the day. On our way back to the subway station we pass a group of American tourists who are perplexed by the mass of people who have just emerged from this side street. As soon was we are past them V asks me which country they are from. Guessing nationalities is her hobby. She’s going to try it in the UK.

*Not including Taiwan here. Let’s not get into that.
**I could swear I saw the same old man on a bus in Tongzhou a couple of months later. He looked much less ebullient, much less confident. Out of his environment, perhaps. Or, let’s be honest, probably not the same old man.